Skip to content
I’m new to the whole Phish thing. At no point in time did I ever think I would be headed to a Phish show during the Baker’s Dozen run at Madison Square Garden. I was that person who made fun of Phish fans. Then I married into the jam scene and my world completely changed. It was gradual. My readers have been beaten over the head with the concept on more than one occasion but to me, honestly is key. I can’t write honesty about music unless I tell you honestly how I came to find it. In this case, I had to have my music mind shaken upside down for a few years.
Father’s Day this year, I surprised my Phish Head husband with tickets. I had asked him, could he see any show during the run, which would he want to see? July 30th, he says. “Its a Sunday. You NEVER miss a Sunday Phish show.” I still don’t know what this means, but people keep saying it to me. I look forward to finding out. In addition, he wanted to check out the pre-party happening that day at American Beauty, right around the corner from MSG. Apparently this venue has not only great beer and great music. but free pizza.
FREE PIZZA?! Did heaven itself build a music venue? But it’s true, and in the words of my friend Alzie from the band Newton Crosby when I inquired about it, “It’s actually really good free pizza…”
I’m already sold. 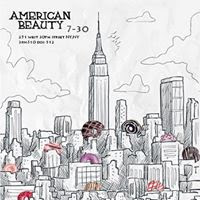 But lets get to the REAL reason we are headed to American Beauty the afternoon of July 30th before we go rage at Phish – Wig Party and Bee. These two really incredible local bands are putting on a great pre-party to warm everyone up for the big event that follows that evening. Two great bands from the tri-state area to groove you with steady jams and good vibes, one location, a short walk, free pizza. I see nothing about this event that should be keeping you from heading there. Let’s talk about the bands:
Wig Party lead vocalist/guitarist Vince Ventriglia played in a project with my husband at the Stanhope House, opening for that infamous Kung Fu show that I had to miss and cried myself to sleep during. (sad face) I did get to see some videos though and the guitar style that Vince put forth made me curious about what Wig Party had going on. You can hop on over to YouTube and see some really outstanding music these guys are putting out there. So that was what I did.
Their sound is a smooth rock and jam feel. It’s never too much of one thing. There is no showboat in this band so the blend is both tight and strong. The guitar layers well between the bass and keys with a real steady and clean drum beat in every song. The sound is just a really positive groove that has a really steady flow. The sound doesn’t let you down. These are four incredibly talented guys writing really great songs and they represent outstandingly live. I was really impressed by their sound. You can relax and vibe with Wig Party. My experience with the band is via YouTube videos at present, so I am really looking forward to being able to feel the groove in the moment.
Originally formed in 2010, they have had some lineup changes over the years before finally finding their blend in 2016 with the current roster. Vince does most of the vocals and guitar, while bass player John Cisco and drummer Dom Palombi add the body moving groove. The really fab key work is Hank Rosenthal. Put together, they have a great rock jam flavor with a good vocal flow and just a really great overall feel to the music. They just opened up for the Kitchen Dwellers at the Stanhope House back in May where they are regulars, and have been scene on the stages of The Bitter End and New Hope’s John and Peter’s, to name a few. Very few. These guys have played all over the place.
Now on to Bee! Bee formed in 2014 in Brooklyn and have been working through the tri-state area and beyond to bring their positive vibe to the masses. Comprised of Connecticut born Chris Judge on bass, guitarist and vocalist Mark Mammano, and drummer Nick Salgo (both formerly of Mother’s Wine), they are veterans to the American Beauty stage, this being their 5th time at the venue. (third this year!) In addition, they were just a part of the July 4th PermaJam Festival, having won their spot through social media popular vote. This is not surprising. These guys are great.
Bee has a solid jam groove, encompassing a really large and solid sound. They incorporate elements of funk, bluegrass, dance jams, as well as guitar driven rock and roll into what they write and what comes out is fantastic. When asked to describe the vibe being put forth, Mammano says, “We try to straddle the line between seriousness and absurdity, both musically and lyrically. We take our craft very seriously but at the end of the day our live experience aims to create a fun, positive atmosphere. Some of our songs touch upon heavy themes and some of our songs are tongue in cheek reminders to eat your vegetables.”
They are headed into the Studio come September to record their second LP. Keep those eyes peeled.
I was able to sit down with Ventrigila over a couple beers and tacos recently to ask how he feels about this upcoming show. “We are really excited!” he says, “I have a really good feeling about this show.” When asked his opinion of Bee, who he got to see open for Kung Fu along side of him a few months back, he says, “Bee has a really big sound for a three piece. A three piece is hard to do and takes some balls. I was so impressed with Nick’s drumming. He’s not like a lot of the other younger drummers out there. He never over plays. He does it right.”
You can check out upcoming dates and releases from these really active bands at their pages:
WIG PARTY
BEE
Do yourself a favor and come out to American Beauty before Phish on Sunday, July 30th to catch this party. Get warmed up for the big show with some incredible music and really great guys. A free pizza. The doors open at 3:00pm. Bee hits the stage at 4:00 and Wig Party at 5:00. I expect to see you there.