Skip to content
Last night, I went and saw Phish.
This is not going to be a real long and drawn out description from top to bottom because I have looked and those already exist all over the damn place. This is a straight truth piece about what happens when the outsider gets inside.

Listen, I am losing punk rock points with every stroke of the keyboard on this article and I can already feel the side-eye from a lot of people I know in the ska scene. Before you all write me off as some lost cause or scene casualty or worse – not a true fan of either genre – let’s actually talk about what it is to be a part of a Phish show. This will require you to remove your know-it-all hat and “I only listen to ___” glasses and actually, for a moment, trust that I have something of substance to say on this subject.

I shared the exact same video you did on Facebook. You know the one, the “This is what Phish sounds like to people who don’t like Phish” video. And it was funny! It’s still funny! It’s basically footage of the band overdubbed with what sounds like my toddler playing instruments and occasional fart noises and nonsense words. It’s hilarious, be you a fan or not. For a long time, I swore up and down that I didn’t like Phish. That I didn’t get it. That it wasn’t my scene and it wasn’t my kind of music. This may or may not have been true in part, but the fact is – and this is what most of the people who have also shared that video fail to ever admit – I had never actually sat down and given a Phish record a listen. And guess what…that makes ME the asshole. Think about it. Think about your favorite song by your favorite artist. Now imagine someone saying they hate it. They hate all of it. They make videos mocking your band to show how much they hate it – but they have never actually listened to it. That doesn’t make you the asshole. That makes them the asshole. And I was the asshole here.

Maybe asshole is harsh. Closed minded perhaps. Presumptive. Relying on stereotypes instead of my own listening, this listening which has never let me down. Why did I do that? I don’t know. Why do any of us? I did it with the entire scene for a long time and I was WRONG WRONG WRONG and I do my very best to tell other people they might be too. But I admit it. I wasn’t listening.

Marrying a jam guy helped this. Still, it took him 5 years to get me to go see them. I wasn’t ready to admit that I was a closed minded dope when it came to music for a long time. The last two years really changed that for me so when Father’s Day came, I decided to buy him Phish tickets. He had not been to see them in about 6 years and was itching to go. The Bakers Dozen shows were rolling through Madison Square Garden. It was as good a time as any to see if I was really wrong all those years. I asked him what night he would prefer to go and declaring you “Never Miss a Sunday” (someone explain that to me) he chose 7/30 for his show. Plus we wanted to check out Bee and Wig Party at American Beauty before Phish, but that is another article. 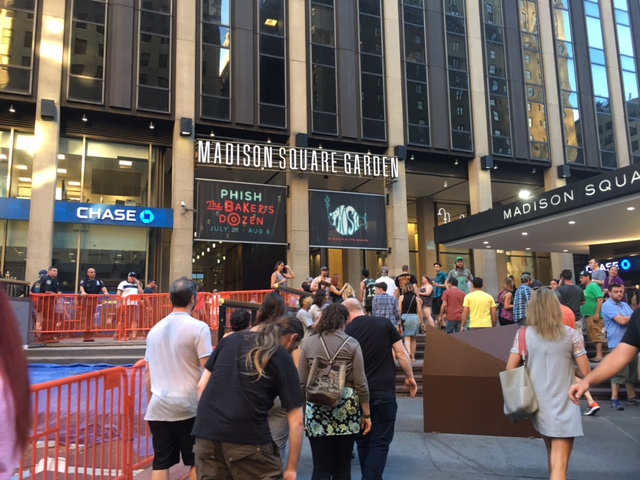 We arrived to the Garden with tickets in hand for the Sky Bridge section. I had heard through other folks that this was the place to see a show at MSG since it’s redesign so I spent the extra $10 each for us to be up there for this. It’s a long walk (and escalator ride) up there but believe me when I say it’s so worth it. I don’t think I can ever see another event of any kind at the Garden sitting anywhere else. The sound in the Sky Bridge is amazing. The view of the entire arena is incredible. There are screens between each seat (which were not used last night) and outlets in case you want to charge your phone. You are close to bathrooms and the all important beer. It’s really very cool. We were right above stage left over Paige. For this aspect alone, the night was amazing, but let’s go into it further. 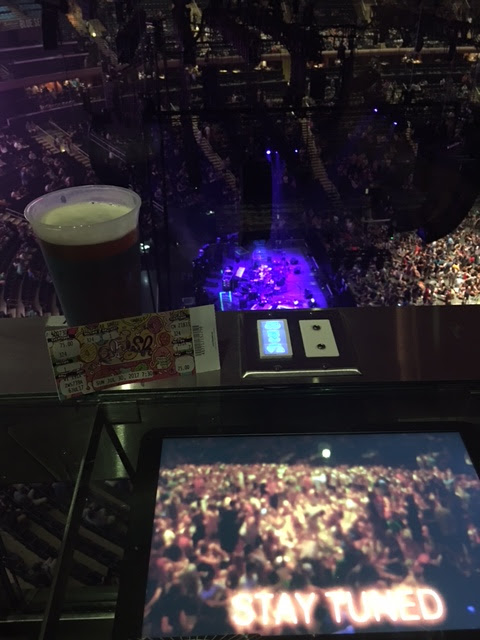 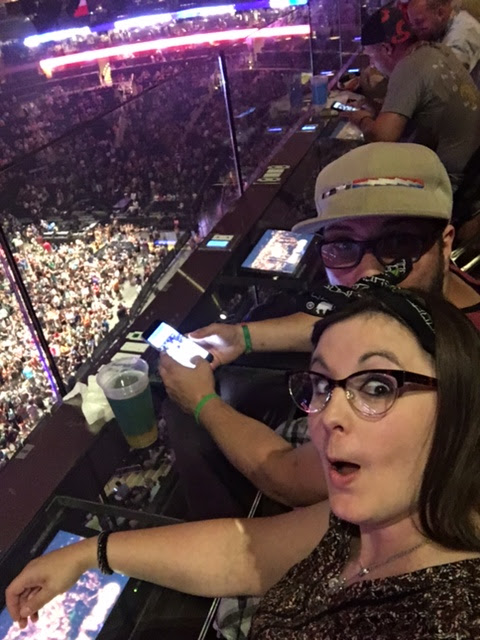 The band started up with a really energetic first set. I don’t know the names of all the songs and had to rely on my husband for names (and the almighty internet for set lists) but what I heard, I liked. I had been listening to studio stuff for a couple months (I have never been big on live albums, with a handful of exceptions) but I am hardly at a point to be chasing songs at a Phish show. However, I will admit to being really moved and for people who WERE chasing songs, there were apparently some real rarities included last night that went back decades. I’m pretty stoked I got to see that. I loved Home. That was on one of the albums I had been digesting. I absolutely loved Brian and Robert. It’s a song I had never heard that I really connected with in the moment. It’s been that kind of month, and that song hit the nail on the head. I think I will be listening to that a lot.

I am not in the know on a lot of what Phish is. I don’t know what the key words and phrases mean. I felt kind of like I was being brought into a secret society last night to experience a fertility ritual or something. (and judging by the many happy couples I witnessed, I don’t doubt there were a few babies conceived last night) I have to say first off that there is a general sense of joy across the arena. It’s not to say that in a building that holds thousands upon thousands of people that everyone is a stellar human because that is simply not the case, but overall the mood was good. It was carefree. There was a contagious smile that was being passed around the arena all night like a bouncing balloon illuminated with a glowstick inside and everyone wanted to catch it. Phish makes you want to catch it. I really enjoyed that aspect. 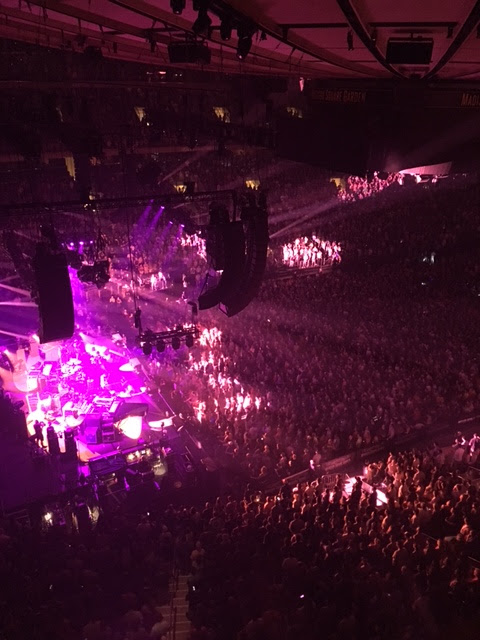 They say “Paige side is rage side” but I saw nothing but happy people dancing across the entire floor, no matter where they stood. When the jams got deep, I would stop and watch those folks down there just taking it in and giving it out and feeling every bit of the air and atmosphere. That alone will make someone who loves music smile. That is what it’s all about. Love it, and share it. Bring a friend and show them what you love. Maybe they won’t love it, but what a good time you will have. And dance like you have no cares in the world. I saw a lot of that and I loved it. 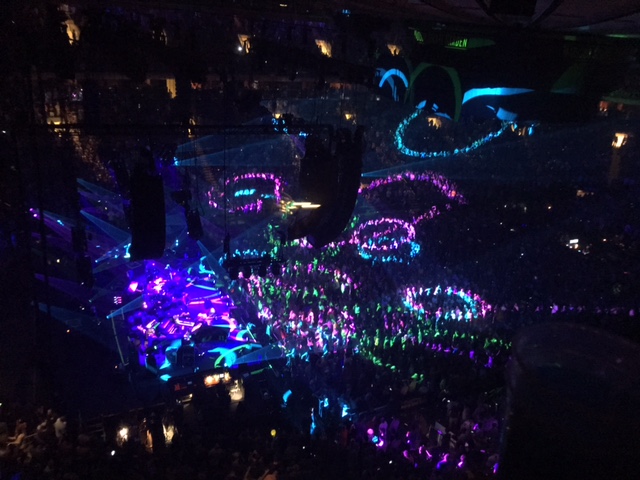 The second set came and started out really interesting, but here is where I need to be honest. The jams got really heavy and deep. They got into some strings of long deep, dark sounds, things that made me stop and just watch because the lighting at the show was really just fascinating. But I don’t really dig these kinds of jams. That’s not to say I never will, but I am still just dipping my toes into this pool. The water is still really cold and I am not yet accustomed. When it gets heady and long, I kind of zone out. Maybe that is what you are supposed to do. It was also an INCREDIBLY long day and my body was slowly giving out. Let me get straight with everyone here for a minute though, taking that whole concept into account, and I will close this out here:

Phish is a band that will blow you away if you let them. I had no idea what I was experiencing and I fell right in. I approached Phish as a skeptic. As a music brat and a bit of an elitist. There are undeniable facts you observe at a Phish show. The individual talent by each musician is disgustingly incredible. They can take a sound apart and put it back together again in ways you didn’t know you could like – or hate – but still love. The music might not be everyone’s cup of tea, and that’s TOTALLY awesome. Music itself is so huge that there is something to light the way inside all of us. Phish might not be it for you. The fact is though, as a band they are amazing at what they do. I have not heard very many artists that can hold a candle to what they can do as players in terms of raw talent. (if any of my more “edgy” associates want further proof, look up Oysterhead – Trey, Les Claypool, and Stuart Copeland) You can listen to Phish and not like it, but if you listen and say they not good, you are simply not listening and if you dare call yourself a musician, stop now.

Phish is a band that will take you on a journey if you open you heart and your mind long enough to TRULY listen. You don’t need to fall in love. You don’t need to sell your soul for clothing and accessories covered in donuts. You don’t need to be an every show attendee. You don’t need to dance or even follow them. But if you stop. If you take that moment to stop and really listen, there is probably something in there for you. You might find yourself chasing a song, seeking that rush of joy, and that itself is life, isn’t it? Finding out what you love and chasing it. When you finally catch it, you feel that joy course through your veins and run all through your soul. When it’s over, you smile and realize you’re not done. You chase it again. That is what I saw in Phish fans. That is what I see in life. The appeal is obvious.