Pop on over to those interwebs, do a search for Shayfer James, and you have found it. And I promise you, you will never be the same.

An amazing blend of haunting and emotional vocals expertly laced through delicately pounding and softly touching piano work. Combine this with his mischievousness in storytelling, and what you walk away with is amazing and different. It’s something new and something old simultaneously. It’s Shayfer James. Try as I might, I can’t find a category that accurately depicts exactly what this music is, but it moves me. Oh, how it moves me. 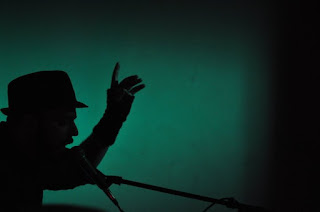 Flashback to September of 2010. I accompanied my best friend and super terrestrial rock DJ Lindsay Klein to a battle of the bands she was helping to judge at Parlay Studios in Jersey City. A converted warehouse now serving as a studio, gallery, and event venue, I was enthralled in all the energy of the many people that milled around inside. Lindsay went off to her judging duties, and I stood around in the crowd, sipping beer, and people watching. Listening to the bands as they came and went. Nothing really caught my attention. In all honesty, I was bored out of my mind. Some of these bands were TERRIBLE! I am not without culture or artistic understanding, but some of these folks were just over my head. Loud, strange, colorful and fun to watch for sure…but nothing new. Nothing fresh. Weird for weird’s sake.

Then it changed. Three gentleman took the stage quietly and politely, well dressed from another era when romance was real and gentlemen chased nightmares away right before they took your hand and showed you how much fun they could be. A quick quiet introduction followed, and they started right in with something that has rung in my head ever since. I don’t recall what song they started off with, but by the time they got to Siren Song, I was hooked. For the record, it has remained my favorite song of his ever since. I could not even explain right then what it was I was hearing. The voice was something like Jeff Buckley, but deeper and from somewhere darker. Melodies that haunted you while they moved your body. Music that got inside me. This was something new. This was something beautiful. I was floored. For an admitted music snob like myself, that doesn’t happen often.

Standing in the long line for the ladies room a short time later, I found myself approached by a very friendly fellow in a bowler hat and neutral vest that I recognized was the singer and pianist from this amazing band I had just listened to. Maybe I was obviously fascinated by this music in view of the stage…I never asked. He shook my hand and said hello. Some small talk followed, and then he was off and on his way.

That was my first introduction to Shayfer James.

I have been a devoted follower ever since. On his website, I found the term “Noirpop” describing this new and dark breed of melody. I don’t think I could have come up with anything better myself.

The Owl and the Elephant from 2010 kicks off my fascination with this music, and was expertly followed up with Counterfeit Arcade in 2011. I have both on pretty consistent rotation on my weekly show, and have received a lot of amazing feedback. I think if you have not delved into what Shayfer can bring out of you, you should. You are missing out on a beautiful journey. You are missing out on music that reads your soul.

Get the music here…

Get both. No two songs sound alike, but every single one tells a story. My suggestion: Listen to Siren Song (The Owl and the Elephant), and then follow it up with Villainous Thing (Counterfeit Arcade). I can’t get enough of this song. Maybe because I am one, but more likely because the up and down beat of the piano slides slowly and smoothly into a chorus you can’t help but sing along with as loudly as possible. I do. Then listen to everything else. Take a long drive. Find someone you really enjoy kissing. Listen. Devour. Absorb, and be changed.

Shayfer James does a gorgeous version of Leonard Cohen’s Waiting For The Miracle in this clip. It’s not on his albums, but you can find it here. If this doesn’t hook you in to how he gets inside your soul with what he does, I don’t know what will.

…I am a blogger. I have been one for a couple years now. I am also a weekly internet DJ in the wonderful world of punk, ska, and alt rock. It’s about time I blended the two…so here we go!

…sign up for updates, and keep your eyes peeled. Want a review? Music? Upcoming show? I am all over it…send me your information.