Skip to content
As much as this last year has led me into so much delicious uncharted territory for me musically, there is something so comforting in heading back to what I know. Going and sitting down with the sounds who made me who I am. That is where I found myself this afternoon. I put on a record that was like curling up in a comfy chair with a warm blanket and a glass of wine. A little history:

Back in 2012, I took off for Brooklyn to catch The Slackers annual Holiday Show at the Bell House. I was there on a wave of lemon cookies and Brooklyn Brewery beer with my friends in all things ska, Michelle and Chris. It was a good night for so many reasons. Good friends, laughing, getting in trouble for trying to leave Obi Fernandez’s flyers everywhere (apparently, they frown on that), being as annoying as humanly possible in front of the stage until the Slackers gave in to my badgering and played Make Me Smile…my favorite song. The first time I ever heard it live.

It was an unforgettable night. It was also the first time I saw, heard, and experienced the vocals and style of Caz Gardiner. She was the front woman of Caz and the Day Laborers and I was blown away by this charismatic powerhouse leading off the show. She had such a style to her and she owned the stage in that moment. The music was great and after that, I made the band a regular spin on my podcast from then on. Their song You Got it is still a favorite and I still put their music on pretty regularly. In the midst of what I understood at the time to be a male dominated scene, Caz was a breath of fresh air in her retro style and incredible vocals. She stood out because her vibe was so contagious. Since that show, I have been a huge fan.

Naturally, I was delighted to get a copy of Caz’s new album, It’s Alright. I could not wait to dig into it. It’s been blazing through my headphones on repeat since she sent it over to me and I have to honestly say that I am blown away. This is going to be playing a whole lot in my car (if you are a passenger, you have been warned). I started writing right away. I have been writing since. 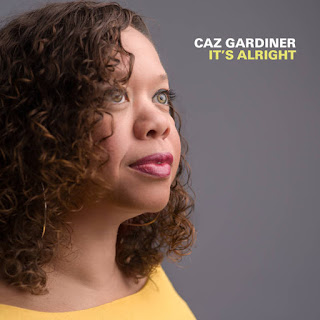 This is one of those albums that I hear and already wish I knew all the words to because I just want to sing along so bad. It’s retro 60’s soul with clean rocksteady simplicity creating this incredible bold feel that still remains gentle in it’s delivery. Caz has this amazingly fresh vocal style. She is a blend of a sassy pop flair and a traditional, familiar reggae groove. Her vibe is a throwback to simpler times when skirts flared and music was sexy. Her voice is this complex mixture of Martha Reeves and The Marvelettes with just a dash of sassy Tina Turner. It’s so unique and yet so familiar. It’s sweet but it’s strong. It’s addicting. It’s straight up intoxicating.

The track Changed My Mind has an almost Eurythmics vibe beneath these layers upon layers of soulful groove. At the same time, her voice is a cathartic tour guide through feelings of regret and lost love. It’s sexy. It’s delicious. You feel what is beneath those lyrics in the fever of the song. It’s elegant in it’s delivery, but it speaks to you so much deeper.

Move on over to Yes I Do and feel immediately grabbed by rocksteady tides and pulled into a groove stream that doesn’t let you go until it’s over. Caz’s approach to her vocal is seemingly effortless. She is a relaxed presence while still dripping with inviting notions. He sound is classic but it’s truly it’s own. It’s simple in it’s complexities. Am I confusing you? You need to listen to understand. Caz has her own thing going on.

Skip on over to It’s Alright. This might be my favorite track on the album. I am usually holding high standards for a title track because I feel like it is some sort of album representation whether it likes it or not. (yes, I am aware this is silly) This song really accents what a vocal powerhouse Caz is. She is laying her soul out for everyone to see with her voice in this song. The backups are just tops and I am so stuck on the bass and keys on this song as well. For someone who thought herself familiar with Caz’s range and style, I actually had to stop and stare off in the distance for a minute to take it in the feel. I mean, like seriously – WOW. She’s crazy good. Sometimes I think I can sing. I really cant. But if I could sing, I would want to sing like Caz.

Essential Listening:
It’s Gonna Be Alright – This song is is a body moving, sing a long groove train. I am having a very hard time sitting still. I want to get dressed up, get my drink on a little, and take in a Caz show for songs like this. Her sound is so classic.

Yes I Do – The song kicks off as a simple groove and it holds strong, but the vocals come in and say nope. This is so much more than that. This is such a familiar sound but her take on it morphs it into something else entirely. If you listen closely to this song and just close your eyes, you can actually get butterflies from how the words and the vocals work with the groove. You will wish it was being sung for you. I love it. Superb backups. Loving the bass and keys. Simple but so awesome.

At Least I Tried – Hold my beer, I have dancing to do. Sexy dancing. With my husband. He won’t mind. I love this song.

I have not seen Caz since that show in 2012 and I am long overdue. So are you, for that matter. She has some shows in the Washington DC area coming up this summer and I strongly suggest you get out there and check out what she has going on. You can hop over to her website HERE and get some information on where you can catch her live shows. More importantly, pick up her album HERE. You need this record in your life. For inspiration. For power. For soul. For groove. For good vibes. For sexy time.